Brexit Day! | Vital Football
Menu
Log in
Register
How to get up, get out, live!

Status
Not open for further replies.

#1
I hope you all get what you wanted.

I’ll be there to say I told you so

this country is an embarrassment. Your kids will not forgive you.

#2
You won, Brexiteers. Enjoy the exit from the EU, I hope it makes you very happy.

I hope you spend this time out of the EU getting some lessons in grace and decorum because you have all the grace of a reversing dump truck without any tires on.

#6
How can you talk about Brexit on transfer deadline day?

#7
can this please be moved to the gay folder in off topic please.
M

#8
Great decision by Boris to uphold democracy by doing what the electorate voted for, cheerio Europe dictators

Johnson and Javid order budget cuts of at least 5%

wait what? I thought austerity was over?

#11
Marco Polo said:
I hope you all get what you wanted.

I’ll be there to say I told you so

this country is an embarrassment. Your kids will not forgive you.
Click to expand...
My kids voted to leave !

#12
As I said they’ve no one else to blame now. The stupidest decision made in a long time. On the plus side when we rejoin we’ll be on worst terms so we’ve shot ourselves in both feet, still 50p & blue passports.

#14
Lienking said:
My kids voted to leave !
Click to expand...
well, then they'll see what happens and shoulder the blame too

This.
Click to expand...
it's cringeworthy. people are so easily led

Bong flop money going to help for heroes? Absolutely terrific charity but the chutzpah is an insult.

#17
Marco Polo said:
well, then they'll see what happens and shoulder the blame too
Click to expand...
I doubt it. 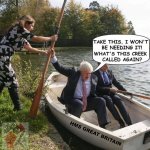 #20
Everyone is putting great focus on Brexit day, when in affect it means very little.
The important part will be the agreements reached in this year, if we leave in December.
Would be no surprise if it goes very quiet now as the general public who wanted Brexit think it is done. They can have there parties tonight driving to them in German cars, drinking Belgian beer, listening to music on Chinese equipment, standing in buildings with timber from Scandinavia, blockwork from Canada or China, glasses being washed by Spanish dishwashers and eating snacks harvested by poles and affording it all on the prosperity driven through trade with the EU!
Westminster now have absolute power with no normalisation from the EU.
Hopefully they see it would not be in the interest of the country or the EU to agree a punitive trade deal.
There could be a lot of chatter about taking back control of our borders and preventing immigration, probably as a smoke screen, but for there to be wholesale changes to trade would have a damaging effect on the EU and cripple the UK. I hope that does not happen. Could we align ourselves to EU law and trade, probably.

We(?) have thrown away 30 years of growth in the UK. Time distorts how poor the UK was in the 70's prior to entering the common market.

Status
Not open for further replies.