Nottingham Forest vs Middlesbrough sponsored by Lavish US Weddings 4 U

#1
There's a match on tonight at the stadium formerly known as the World Famous City Ground.
Pope must be home from school by now but we have to presume he is sufficiently disillusioned that he can't be arsed to trawl the stats for us. A pity for us, but who can blame him? You? Can you? No, thought not.

Boro are also shit. But they have managed to average a point a game from the first six, with three draws and a win at home vs Bristol City. On two occasions they have scored twice in the same game - fancy that! - a feat we have achieved only once. They have also twice conceded three, so our red hot strikers will be licking their lips at the prospect of a cricket score.
For them, Ikpeazu and Crooks have both played every match and have chalked up two goals each.

Despite talk of fine margins and no signs of the players turning on CH, morale must be low at the CG as well as here on Vital and there is a very real prospect this bitch won't make two pages unless the manager goes. Or stays. Either way, you can expect thrills, goals and moaning.

Scattered clouds but little chance of rain falling on the loyal masochists comprising the home crowd. Temperatures dropping from 17 to 15 degrees during the match and we can expect a touch of frost in the boardroom afterwards.

My prediction? No-one cares, but as it happens I'm throwing caution to the wind (3mph westerly) and predicting our first league win of the season.

i am a tree

#3
seasider red said:
I reckon we'll win tonight and it'll give CH a stay of execution which means we'll go on to lose the next 6
Click to expand...
I reckon we're gonna get absolutely dicked but we won't sack Hughton anyway.

#6
Soh at right back by the looks of it.

i am a tree

#8
seasider red said:
Change of goalkeeper tonight chaps a small step in the right direction at least
Click to expand...
This is yet to be seen, but i'm hopeful.

#9
Was actually thinking he's finally trying the 3 at the back, then realised Spence can't play, so same as the Cardiff game which is really the classic 4231
F

#10
No Mighten in the squad? Hoping it's 3 at the back, but who is playing right WB? Johnson/Zinc

Still a clueless selection by retaining both Yates and Taylor. Thankfully Soh is back, and Samba is gone.
Maybe by Huddersfield with our RB available we can start to see a new shape emerge.

#11
Something needed to be done with samba. Hope It pays off 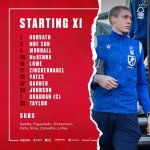 #13
The line up will tell us whether Hughton is going to at least go out fighting rather than just accepting the inevitable. We also need to see some proactive subs tonight. Something to at least show a bit of nous.

Edit: 4-4-2 and Samba dropped. Silva on the bench too. That irrational hope still burns!

#14
Colback and mighten not even in the squad

#15
Our midfield options from the bench are awful..

#16
the jock said:
Colback and mighten not even in the squad
Click to expand...
Mighten has been garbage and I don’t think Hughton will get anywhere with a negative sub so bye bye Colback.

#17
the jock said:
Something needed to be done with samba. Hope It pays off
Click to expand...
It did three games ago , but he saved plenty of attempts on Sunday and didn’t deserve dropping tonight. This is the last desperate attempt from a man going to the gallows.

#18
What's happened to Fin Back? Didn't disgrace himself at all when he played and now when we're down a RB or three can't even get in the squad? Is he injured?

#19
Garner and Johnson need to step up tonight. Zinc too