#1
He was a joy': when Tino Asprilla lit up Newcastle 25 years ago

When I think of him, I can’t help but smile,” says Warren Barton. Tino Asprilla arrived at Newcastle United from Parma in 1996 and his introduction to life on Tyneside is almost as iconic as his time on the pitch. Through a raging, snowy blizzard, the Colombian emerged in a huge fur coat. It was a film star entrance for an 18-month blockbuster Hollywood couldn’t write.
Everything Asprilla did was box office. He is among the most memorable cast members from a story frozen in time for Newcastle supporters. Kevin Keegan and his team of entertainers, who surrendered a 12-point lead at the top of the Premier League to Manchester United, are remembered as one of the best sides never to claim the title. In many ways, their failure only adds to the romanticism.


Asprilla became an easy target as time moved on. Newcastle were flying before he arrived and the narrative goes that he somehow disrupted the flow. “That is bollocks,” says Robbie Elliott. “He was the life and soul of the team. We were a very tight-knit group and he came in and added to that. He integrated very quickly; his smile every morning was infectious. You could always hear his voice. He had an interpreter, but his English was better than he let on.
“Newcastle really were on the map when we were getting players like Tino to join. There were reasons behind everyone Kevin signed. With Tino it was that unpredictability, he just unlocked teams. His nickname was the octopus because his legs were everywhere and you literally had no idea what he was going to do.” 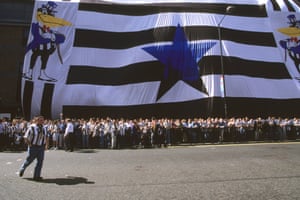 Newcastle fans wait outside St. James’ Park to greet Asprilla. Photograph: Peter Robinson/Empics Sport
“He was a joy to be around,” says Barton. “I have such fond memories of him. He was a top-class player as well. A lot of that gets lost because of his antics and the way he celebrated, but what a player. He was phenomenal. At the end of a game, he’d look like he’d been pulled through a hedge backwards, with his socks pulled down, the tassels on his shorts untied and his shirt hanging out. But he was quick, intelligent and had great feet.”
Against Middlesbrough on his debut – the same day as his signing – Asprilla made an instant impact. He wasn’t supposed to be playing, but took his place on the bench in case of emergency. Newcastle were 1-0 down at the Riverside and in need of inspiration so Keegan summoned him. He certainly left his mark. A Cruyff turn and cross for Steve Watson helped level the scores before Les Ferdinand grabbed the winner.
“He’d just got off the plane, it was freezing cold and he obviously felt a bit relaxed, like any of us would,” recalls Ferdinand. “You’ve just signed for a new club, you wouldn’t expect to play. It showed his natural ability that Kevin called him on and he did what he did. The drag back for Steve Watson was brilliant: that is what Tino was like, he could switch it on and off.” 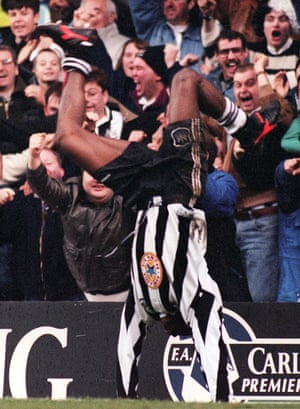 Asprilla celebrates after scoring for Newcastle in their 3-3 draw against Manchester City in February 1996. Photograph: David Ashdown/Shutterstock
Ferdinand admits the tactical shift, which followed the Middlesbrough game as Keegan attempted to shoehorn Asprilla into the side, did play a role in the eventually fatal loss of form as the season went on. “We had to shuffle round a little bit,” he says. “Keith Gillespie and David Ginola had been the supply line throughout the early part of the season. When Keith got injured, Keegan moved Peter [Beardsley] out to the right-hand side because he wanted to try and get myself and Asprilla into the side. That made us a little lop-sided, I thought. Maybe that was key to us not scoring as many goals as we did in the first half of the season. I lost form, Rob Lee did; if you name the top players in the side, we all lost form at the same time.”
“The problem was, he played so bloody well and we thought we couldn’t leave him out,” Barton adds.
Asprilla’s unique personality instantly endeared him to his teammates and the Newcastle fans. But even those who saw him every day could not quite work him out. Alan Shearer joined the club the following summer and Barton remembers the relationship struck up between the pair.
“He was an enigma,” says Barton. “There are so many stories and you just think: ‘That’s Tino!’. He did things you wouldn’t expect an adult to do; this is a grown man who would wear Mickey Mouse and Donald Duck shirts. But that is part of him, we don’t know everything and if we did it would be boring. Whether he was in the changing room, warming up before a game or at a restaurant on the quayside, he was always having fun. In training, he was a nightmare. Alan Irvine [academy director and coach] was very particular; he laid all the balls out, the system was set out and everything like that. He was a very good coach, very organised. Tino would come walking over and boot the balls everywhere. It would just break the ice, but you could see the steam coming out of Alan’s ears.
“He was obsessed with Alan, too. He couldn’t get enough of him. He’d be touching his hair, he’d just be near him. Sometimes, we’d find him just staring at Alan, but he would always call him Shearer, like ‘Shearer! Shearer!’. I’d love for someone to look at me like that. He was infatuated and the feeling was mutual. The humour that them two had, they just clicked.”
B

#3
He was some player when he scored his hat trick v Barcelona I nearly jumped out of my kitchen window. Happy days indeed.
U

#4
Ahhhh what a fucking legend Asprilla was and that game v Barcelona was electric, probably the best game I've ever been to at SJP. One of the few highlights of the Dogleash era (with KK's team).