Tottenham's Eric Dier has revealed he wants his ashes to be scattered at the club's stadium.
In a Q&A with this week's ES Magazine, the Spurs centre-half was asked where he would like to be buried and revealed his loyalty to the club runs beyond the grave.

"I’d have my ashes scattered in Tottenham Hotspur Stadium," he said.

"Growing up, tennis was very big in my family and my brothers and I were huge Nadal fans," he said. 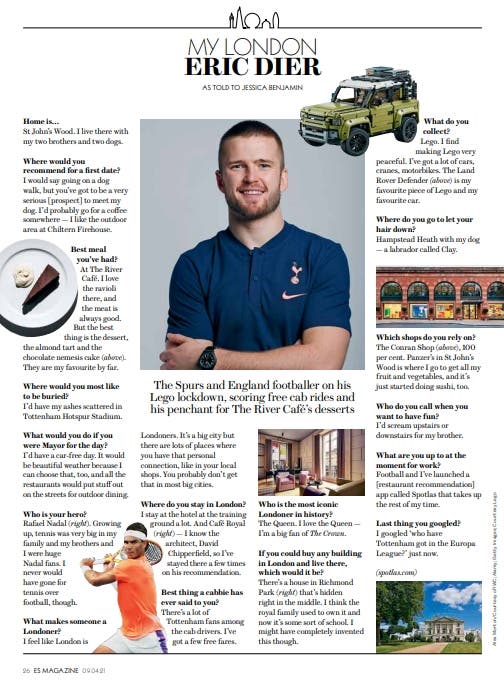 ES Magazine
"I never would have gone for tennis over football, though."
More surprisingly, the England international also reveres the Queen, with the 27-year-old describing the Sovereign as the most iconic Londoner.
"I love the Queen – I’m a big fan of [the TV series] The Crown," he said.
You can read Dier’s full interview with Jessica Benjamin, and his love of Lego, in ES Magazine, which is out on Thursday and Friday.

#2
Perhaps Jose will make his dream come true as he metaphorically scatters the ashes of his Spurs career..?!
S

#3
That’s different. There was me thinking he had already been buried by a few opposition forwards!!
M

#4
It's tough. I think he's a really likable guy who clearly cares. But he's had such a decline the last few years that it is hard to see why we would not want to look elsewhere.

#5
meee93 said:
It's tough. I think he's a really likable guy who clearly cares. But he's had such a decline the last few years that it is hard to see why we would not want to look elsewhere.
Click to expand...
The voice of reason. He is a great guy.

The other challenge is that whilst he should have a homegrown status by now, he never will. 45 caps for his country, 7 years in the Prem and over 200 appearances count for nothing. I'd have no problem him making up the squad numbers if he was homegrown.

Remembering how well he played on the right of Toby and Jan, I also feel bad for him that he ended up on the left side of defence.

We do need to move on though.

#7
10Hoddle said:
I didn't know he was dead!
Click to expand...
Must be a living rigour mortis then!
P